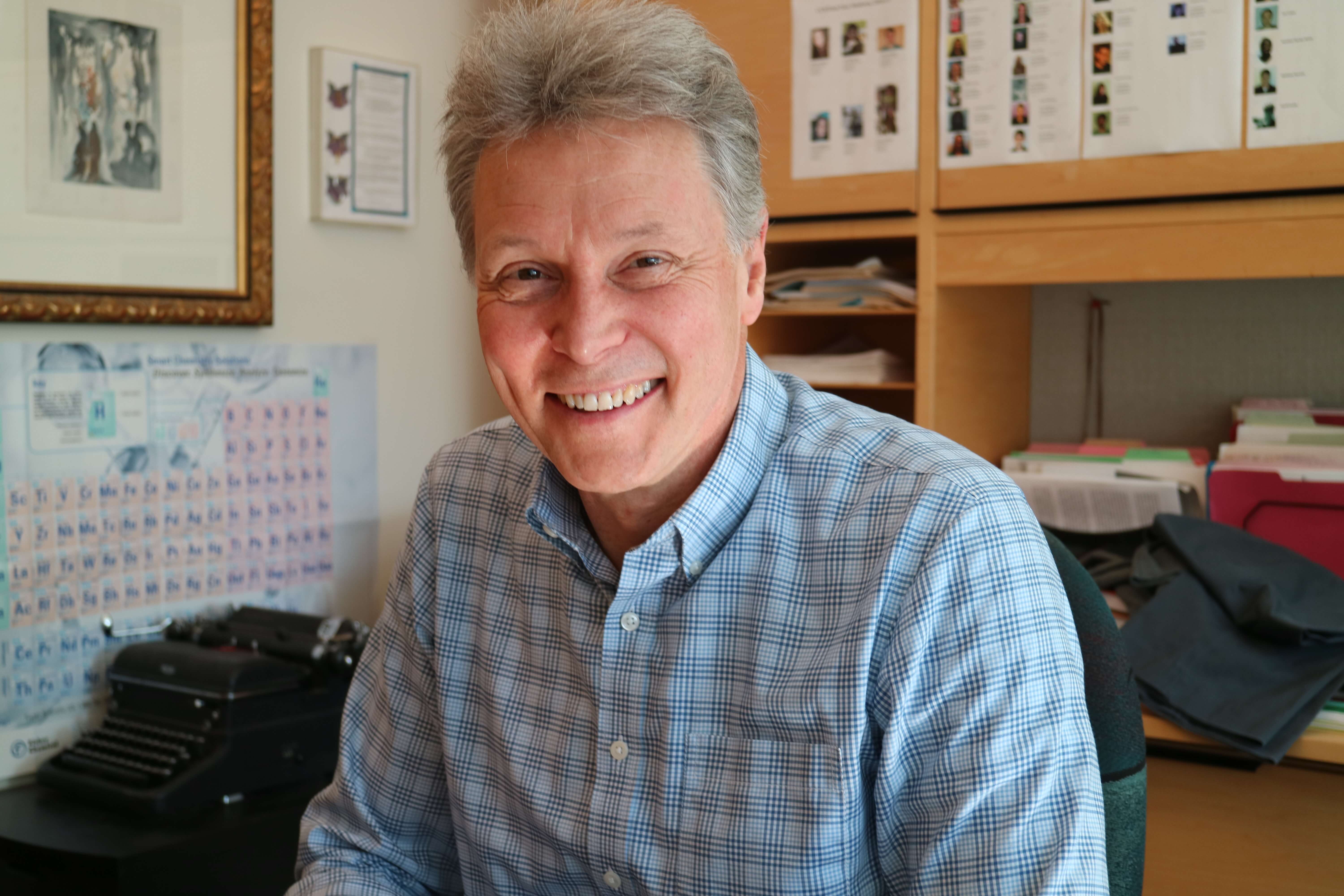 Q: In a couple sentences, tell me about what you do in your work.

A: I was trained as a chemist, and I’ve always wanted to use chemistry to answer important questions, in particular biological questions or questions at the interface between biology and medicine and pharmacy. Chemistry is really cool because it’s the way the world is put together: the paints and the fabrics, it’s all chemistry. It’s a really mature field, but there is so much power in it that you can use it to try to not only understand biology, but to intervene. That’s why I came here and that’s why I stay here. I think we can use chemistry to eventually...you know, if it’s going to be drugs, diagnostics...most of those will come from chemistry. So, the way I put it, there are three things in life that you cannot avoid: everyone knows death and taxes, but the one they are starting to appreciate is no matter how well you take care of yourself, you’re going to take a pharmaceutical at some point in your life. And we need better ones. So that’s what I try to do. I try to figure out how to take our research and do something with it that could eventually impact human health.

Coming here as a chemist meant that I needed to talk to biologists to figure out what were really important questions. I thought I knew what some were, but when I was an assistant professor, somebody with the name of Harold Varmus-- who had been working on a virus that was associated with making people very sick in San Francisco (HIV)-- said “Charly, I think some of the stuff you’re doing over here would be much more interesting if you did it on something like this (HIV).” So I started working on HIV, which was the first time I really thought I might be able to have an impact with some of our work. A large group of us worked on helping validate what is called HIV protease as a therapeutic target. That got me involved in other infectious diseases, and then I realized about 10 years later that “wow, maybe some of these things could be applied to cancer.”

So very broadly speaking I work with infectious disease and cancer.

A: AHH the favorite part! It’s so easy to answer that question. When you find something out that no one else knows, and you're the first one to find it out, there is NOTHING (for me) that compares to that. It is one of the most exciting things; It’s like “Are you serious? No one knows this! No one. I’m the first to know!” I remember the first time I made my first discovery with my own hands in a lab. That’s an experience that once you’ve had it, you want to keep getting it. It’s as addictive as anything. It happens so unbelievably rarely.. 1 out of 100 times! That’s why you want to have a group. If you have a group, and if something’s not working, at least something else is. That’s why I love being a scientist. UCSF is such a great platform to affect the clinic; at UCSF, you could actually contribute to human health. I’m getting older, so I want to make sure there are good things out there to help my friends and myself as we get older. So, when you’re curious and you find something out, that’s great. Figuring out how things work is awesome. Figuring out how it might actually have some way to impact human is simply the best.

Q: What have you created or discovered that you are most proud of?

A: I am proud of lots! I’ve been so fortunate to have people in the lab that I’ve been able to work with. But you’re only as good as your next paper. Which brings me to the next thing I’m really excited about: we might be able to help people with a precursor of pancreatic cancer. Currently some people are having their pancreases removed because of the potential of it becoming cancerous. We have a potential diagnostic that could help them keep their pancreases as if nothing is wrong with it. Except that it looks like it’s bad, but it’s really not. So we’re working with a clinician, Kim Kirkwood, and a graduate student, Sam Ivry, and we’re all quite excited.

A: You set these goals and you really want to have something happen, and you don’t want to be shattered when things don’t work and then give up, so I know that. To balance that, I’m pretty involved in graduate education. Training the next generation is like a war: first line gets wiped out (my generation), which means there better be another generation ready to come and go. So watching people learn from this environment: how to get stuff done by collaborating, doing something really well themselves, yet finding what other people do really well, to me that’s a very important approach if you want to do this sort of interventional work. Graduate students at UCSF get exposed to so much, and I really relish in watching it. If I had all these resources available to me when I was starting, imagine what I could do! So look what’s going to happen in their life. So building the next generation is where I think I’ll have the biggest impact.

A: I bike. I started four years ago. I didn’t really know how to ride a bike. I grew up in a small industrial town. I was driving when I was 12 because if you were able to be close to a farm, you could drive a tractor. To me, bikes were for people who couldn’t afford a car, so as soon as I could get a car, I drove a car. If it was going to go for a block, I’d drive the car. Cars were once cool! That’s back when cars were beautiful… you know the 60s and 70s. So I didn’t bike. Then something quite tragic happened. A post doc of mine died of a heart attack at 36 years old. I was very close to him, Michael Page. There was no reason he should've died...no family history and he looked great. So that got me in a state of mind that I needed to get out of. I thought “Well, it could happen to me. Maybe I should do something.” I live on a hill, so I thought I should start riding a bike. So now I try to bike to and from work. I also have two kids, both in college. I like outdoors, I play basketball when I can. I went to college on a basketball scholarship but had to give it up because it conflicted with chemistry. Now my son plays and he can dunk now. My daughter does neurosciences. She’s done two papers now, so there’s another Craik in literature!

Q:What situation do you think you’d feel the most out-of-place in?

Neurosciences! I’m trying to learn it, I’m really really trying. I just don’t understand how stuff works. I feel so like UGHHH. How I am going to do something in this field? I feel like I’m so behind (scientifically).

Whether I am remembered or not, I want to it to be a better place because I was here with my skills that I developed and talents I was provided. “How can I make a difference with what I’m doing?” Whether it's a new therapeutic or that people are able to keep their pancreases. Having a positive impact with my work in human health is what matters the most to me.