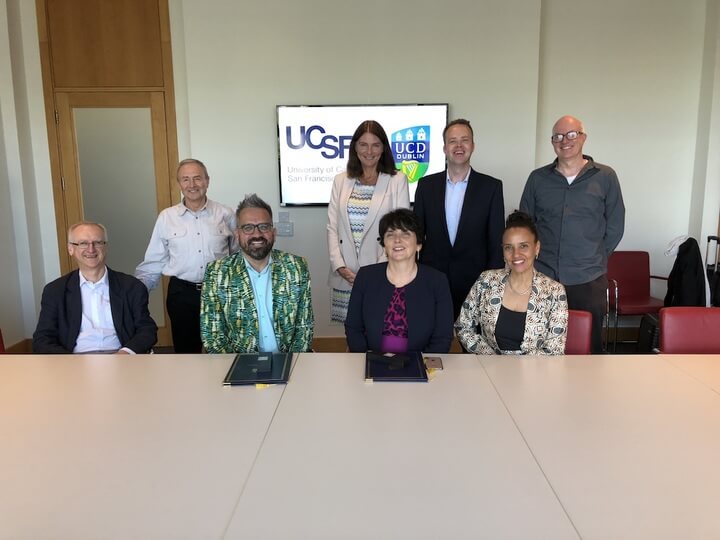 The Quantitative Biosciences Institute (QBI) at the University of California, San Francisco (UCSF) and University College Dublin (UCD) recently signed a 5-year MOU to reinforce the links between scientists in San Francisco and Ireland and broaden their collaborative ability to strengthen scientific research and innovation.

Through this agreement the universities will work together to identify opportunities to promote co-operative biosciences research and training activities between both institutions, beginning with a joint symposium in Dublin in September 2020 that will focus on molecular networks of cancer and other diseases.

This will awaken the potential to move beyond what has already been considered in the fields of cancer, metabolism, obesity and inflammation by combining expertise, ideas and tools to push research forward.

Nevan Krogan, director of QBI said, "QBI continuously seeks novel approaches to address pressing biological and biomedical problems. I strongly feel that it is through these types of alliances that major biological discoveries will occur. I am very excited to see the collaborative efforts that will come from this partnership.”

The enthusiasm towards a collaboration has been mutual since December 2018, when Krogan was first hosted by UCD to give a seminar on understanding mechanisms in disease.

Professor Orla Feely, Vice-President for Research, Innovation and Impact, UCD said, “As Ireland’s global university, one of our strategic objectives is to further develop close links between UCD and leading institutions, such as the University of California, San Francisco. The signed agreement builds on the already close relationship between both institutions and will result in the exchange of staff, students, ideas and knowledge in biosciences, a key research strength of both universities.”

The MOU between QBI and UCD builds from a relationship that dates back to nearly twenty years when Krogan and Gerard Cagney, lecturer and systems professor at University College Dublin, collaborated on several projects. The formalization of these existing ties now allows both institutions to strive towards bigger endeavors simultaneously.

“This collaboration is great for Ireland because UCSF is a world leader and it’s at the forefront of many different areas,” said Cagney, “This agreement opens up a lot of research opportunities and interactions that would not have happened otherwise.”

While UCD has strengths in computational modeling, advanced network reconstructions and machine learning statistical methods, QBI has access to first-rate technology at a larger scale, which creates a good combination where both sides complement each other, he explained.

Walter Kolch, director of Systems Biology Ireland at UCD, and co-organizer of the QBI/UCD symposium next year described science as becoming a global enterprise in need of merging experts. ”The way to break down siloes is getting people talking. That’s what we’re trying to do with this conference. We are trying to kick-start not only collaborations between the States and Ireland but also between fields. I am very excited about this new prospect for collaboration and I think this is going to be something really new where we can do things which we haven’t done before.”