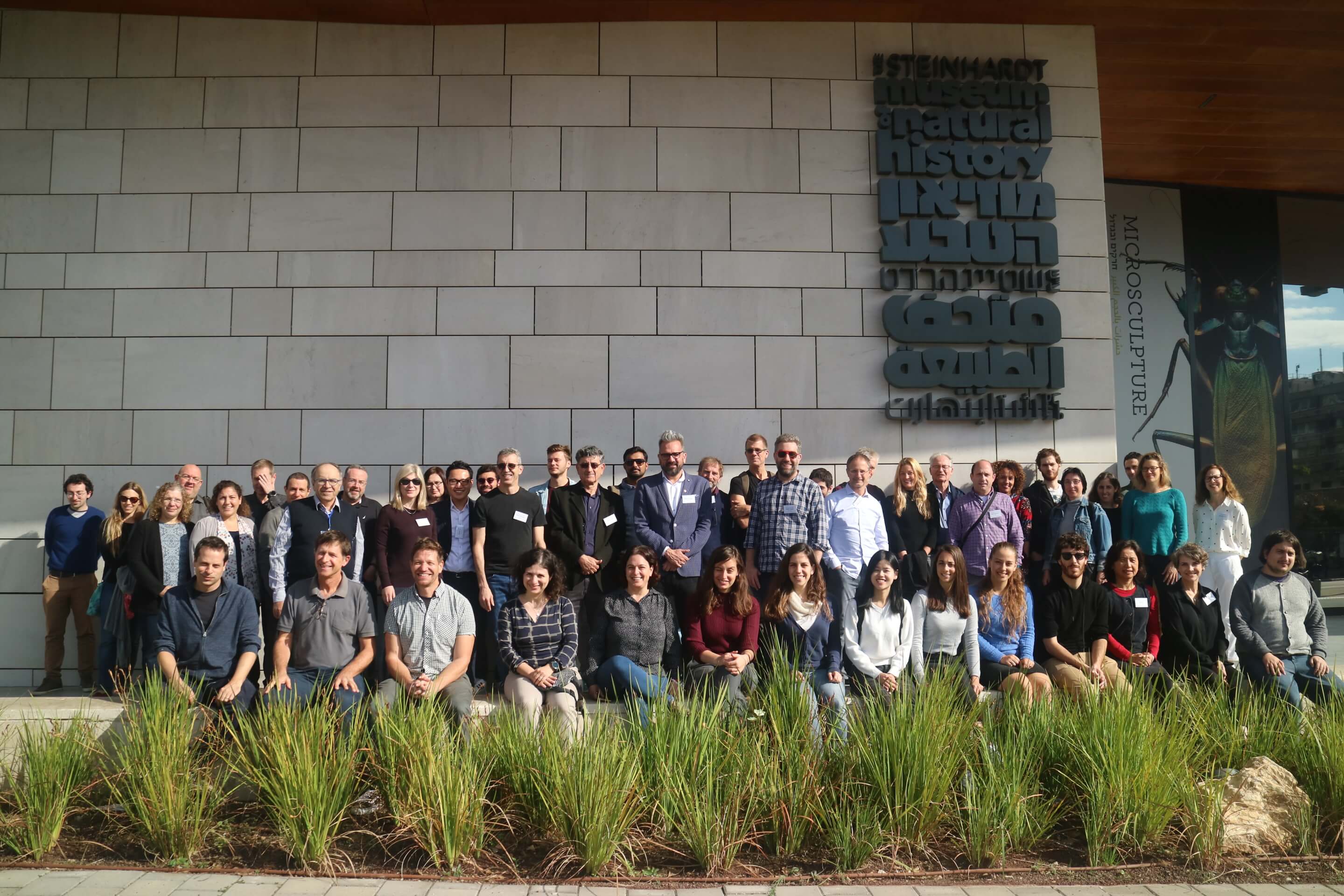 Photo: An assembly of QBI and TAU scientists and attendees gather for a group picture at the Steinhardt Museum of Natural History.

The Quantitative Bioscience Institute (QBI) at the University of California, San Francisco (UCSF), the Edmond J. Safra Center for Bioinformatics and the Blavatnik Center for Drug Discovery at Tel Aviv University (TAU) came together in Israel to launch an inaugural joint-symposium titled “Computational Biology and Drug Discovery,” with the goal of forming collaborations, as well as making new connections and synergies between scientists at both institutions to help facilitate drug discovery through the use of computational approaches.

The new relationship between QBI and TAU is an extension of a collaboration that began more than a decade ago between Nevan Krogan, director of QBI and Ron Shamir, head of the Edmond J. Safra Center for Bioinformatics at TAU, who have since worked together and recognized the value in expanding their alliance with top scientists in San Francisco and Tel Aviv.

QBI has strong technology development for the quantitative collection of various kinds of data sets and TAU has leading expertise in the development of computational tools needed to analyze and integrate data sets together. By combining their strong capabilities, two sets of scientists enter what Krogan calls “the perfect marriage.”

“In my opinion, the best way to do research is through collaboration. It’s through bringing people together with different expertise to work on important biomedical problems. I really think that the big discoveries that are going to come to fruition around different disease areas are going to come from relationships such as this, where larger groups of scientists are brought together from different areas of the world, bringing their different expertise together to tackle these very important problems,” said Krogan.

This symposium was the first step towards a long-term partnership that must be fueled through the raising of funds and philanthropic efforts. The goal is to eventually set in place larger programs that facilitate an on-going exchange of scientific ideas. Krogan and Shamir are both determined to keep the momentum going.

TAU is equipped with the Edmond J. Safra Center for Bioinformatics and the Blavatnik Center for Drug Discovery, which are both what Shamir calls “umbrella organizations” that bring together experts in engineering, medicine, computer science, biology, physics, statistics and chemistry under a common framework and goal. He is confident that these synergistic strengths will be doubled when joining forces with QBI.

Ehud Gazit, academic director of the Blavatnik Center for Drug Discovery at TAU, felt that the scientific interest at the symposium was key in moving forward. “This meeting was unique in bringing people together from the computational and bioinformatics point of view and people who are involved with drug discovery. I think this mélange of different expertise is quite important and successful. We look forward to having our next symposium in San Francisco to further these collaborations,” he said.

Krogan laid out the important next steps of converting data into knowledge. “It is so easy to collect vast amounts of biological information and the challenge is to collect it in a way that is intelligent, quantitative and to collect multiple types of information, then use sophisticated computational tools to integrate these different types of information together to come up with hypotheses about how disease arises and then ultimately come up with hypothesis of how you can treat or hopefully even prevent the disease,” he said.

Ultimately, Krogan said a large motivation for these collaborative efforts towards drug discovery is that a lot of people are now realizing that very little is known about the underlying biology behind most disease areas. The more knowledge there is behind different disease areas, the more easily new targets, drugs and therapeutic routes will surface.

“I truly believe that the relationship we are building between the Tel Aviv University and QBI is a perfect one, where we are bringing our tools together to help uncover new biology that will hopefully lead to new therapies against not just one disease, but a number of different diseases,” he said.

QBI and TAU are putting together seed-funding RFAs to support collaborations between the two institutes.